In the middle of the Veredas landscape, in the heart of Brazil, lies a large and elegant palm tree, the Buriti. Its name means "the one that contains water" because it grows near rivers and streams. Considered as the most beautiful palm tree, its fan-shaped leaves reflect the waters around it. Its fruit-laden bunches nestle at the top and require a certain agility to harvest. Indeed, the pickers must climb up and down using the broad Buriti leaves as parachutes to land softly on the water.

Buriti is used for everything: the leaves for the roof of houses, and the fruit for cooking. Its golden pulp is used to make sweets, jams, jellies and even ice cream. A reddish oil is also extracted from it, traditionally used to soothe burns.

A Fruit with Multiple Benefits

Buriti is one of the main natural sources of beta-carotene, a substance that turns into pro-vitamin A for our body. This type of carotenoid acts as an important antioxidant,  which helps to combat free radicals, responsible for premature cell ageing. Buriti thus helps to slow down skin photoaging.

There are several attributes that make Buriti a special fruit, but perhaps the most surprising is its ability to restore the skin from sun damage. Indeed, Buriti oil protects against ultraviolet rays and has moisturising properties that restore moisture to sun-exposed skin, smoothing dry areas and relieving redness from possible burns.

Its high concentration of fatty acids in the fruit helps protect the skin's collagen, improving its elasticity. The benefits are numerous, including for the hair, as Buriti oil moisturises, strengthens, softens and reduces dryness in hair exposed to the sun.

How do we get our Buriti Oil? 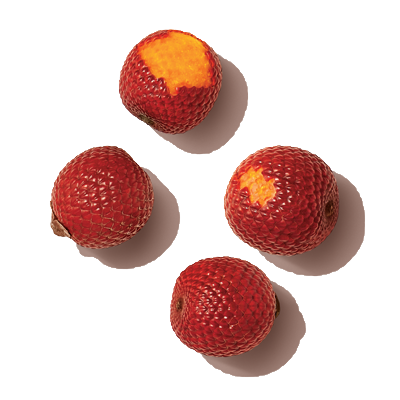 To extract the crude oil from Buriti, the forest guardian communities peel and remove the pulp from the fruit. From the dried pulp remnants comes the pure oil. We extract the pure buriti oil without using chemicals, thus preserving its purity, diversity of compounds and potency.