CASTANHA, A TREASURE TROVE OF NOURISHMENT AND TRADITION

The Castanha, or Brazil nut is the fruit of a tree called the Castanheira. Majestic and abundant, it is considered the King of the forest. It is one of the largest and oldest trees in the Amazon and can grow up to 50 metres tall and live more than 500 years. Its fruits, shaped like wooden capsules and weighing nearly 1 kg, contain nearly two dozen tasty and nutritious castanhas, and are the main source of protein in the forest.

Once harvested, these nuts are traditionally grated and pressed into a nutritious milk which is the staple food of Amazonian communities.

The sustainable harvest of the Castanha 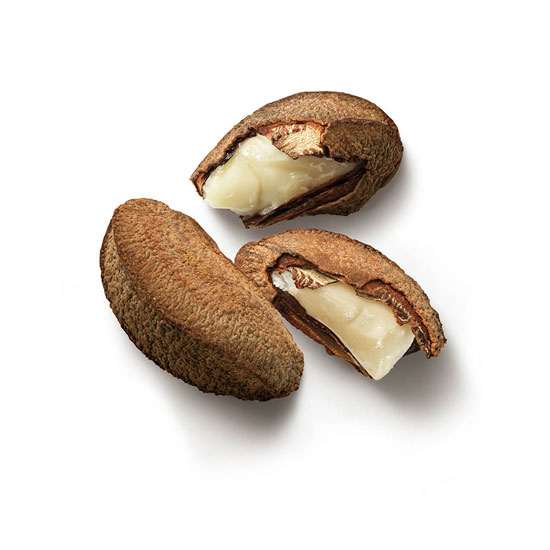 Every year in March, the men of the São Francisco community go up the Iratapuru River to the Reserve where the castanheiras are found. There, they collect 70% of the fruit that has fallen to the ground over a period of 3 months, the rest being left in situ to feed the animals and allow the forest to regenerate. This sustainable forest management is certified by the FSC (Forest Stewardship Council).

The capsules are then broken on the spot and the gathered castanhas are washed and sorted in the river: those that float are discarded, the others are brought back to the community and given to the women who take over. The castanhas are extracted from their shells and then grated.

By mixing the shavings obtained with water, the women obtain a white paste that they work by hand for several hours to obtain a very white milk. After the oil has been removed, only a dry mass called torta remains from this paste. These three foodstuffs, milk, oil and torta, are used every day to feed the whole family. When young mothers do not have enough milk to feed their babies, they give them the protein-rich milk from the castanha nut to drink. Castanha oil has 70% unsaturated fatty acids and is used to make the products in the Ekos Castanha range.

TRADITION WORKING FOR YOUR WELL-BEING

It was while carrying out their work transforming the castanha nut into milk that the women in the village communities discovered its cosmetic properties: kneading the castanha shavings made their hands incredibly soft

Based on this traditional knowledge, the Natura laboratory has carried out extensive research on the components (vitamins A and E, micro-nutrients), and confirmed the ultra-nourishing and antioxidant properties of this ingredient.

Castanha oil is used to make the Ekos Castanha line of products to hydrate and nourish your skin.

Created in the 2000s, Natura Ekos is a range of body care products that aims to awaken everyone's consciences in the face of the accelerating exploitation of the planet's resources.
The desire to enhance Brazilian biodiversityis one of the pillars of Natura Ekos.
The ingredients used in our formulas are harvested sustainably, in line with to strict cultivation standards: without the use of pesticides or synthetic fertilizers.